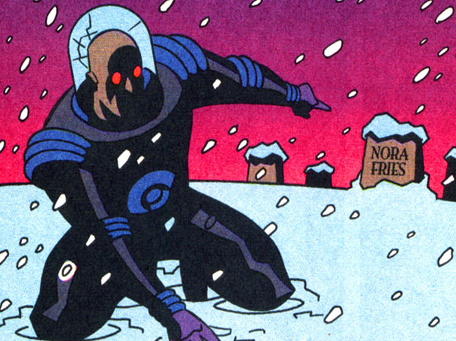 As many of you may not realise, Mr Freeze is one of my favourite villains from Batman’s rogue gallery.  Sure, I love the Joker as much as the next guy but to me, Fries is one of the most interesting and entertaining characters throughout DC’s many mediums.

Rocksteady presented fans with a perfect portrayal of the cold killer with their hit videogame, Arkham City, and Freeze hasn’t been presented so damn well in animation since Batman Beyond.  So obviously, Scott Snyder’s Batman Annual should’ve been a sure-fire hit, right?

Well, not exactly.  You see, when the new 52 hit, a few characters returned with some truly bizarre costume designs.  Of course, there’s the infamous Harley Quinn costume, but there’s also the hardened, bare-armed bizarre look of Mr Fries.

The bulky sci-fi inspired suit is thrown away for glorified overalls, overalls which are also matched with an awful patch of hair.

Why break something that never required fixing?  The problem is though, is that his design wasn’t the only thing which was revised, but his unique origin was too.

For those who aren’t aware, Victor Fries fell in love with a woman called Nora.  He met this woman in college and they married, happily in love together up until she contracted a deadly disease.  To help his love, Fries sticks her into a cryogenic chamber, freezing her in time until he can save her from the terminal disease.

Fries work on salvaging his one love is sabotaged by his boss and his goons, therefore leading up to the chemical incident which creates Mr ‘Freeze’.  It’s a saddening story, which is told well in many different vehicles, but the Annual revises this completely.

Instead of keeping to the classic origin story, the Annual throws in something that just doesn’t fit.  Freeze’s humanity is replaced with clear insanity.  There’s no reasoning for his behaviour, other than the fact it is fuelled by a clear mental illness.  This is revealed to Fries by none other than the Bat.

Back in the day, young Fries had an obsession with ice and a woman that he never ever married.  His one true love was just some poor woman, born in the 40s, who studied at a college and married somebody else.  Yes, Nora is nothing but a woman he stole.  Mr Freeze’s entire sympathetic origin is thrown out of the window, for an edgy new take.

I’m sorry DC, but what?  That’s not how you do it.  Batman already has crazy villains such as Zsasz and Harley, villains simply stuck with a fractured mental state, which is of no true cause.

Freeze had one of the best origins, his humanity, and his sympathetic cause.  That’s the reason why some sympathetic villains are the most entertaining, they have layers.  They actually have a reason to be out there, fighting against a world which turned against them.  Who wants a generic crazed psycho again?

As disappointing as the revision is, Scott Snyder is not a bad writer.  His current work on the on-going series is unique, taking the Court of Owls event to new levels for Bat-comics in a long time.  His previous work, such as Gates of Gotham is also enjoyable.  However, this Annual is just one big misstep, another one in Batman’s newly revised enemies.

If there is a true origin to Freeze, it originates from the critically acclaimed animated series.  Check it out below at the end of this post.

In other news, Harley’s Revenge is terribly short and was without the ending I eagerly expected.  For shame Rocksteady, but at least the gameplay is sweet and I still get to see my favourite female character on the screen again.