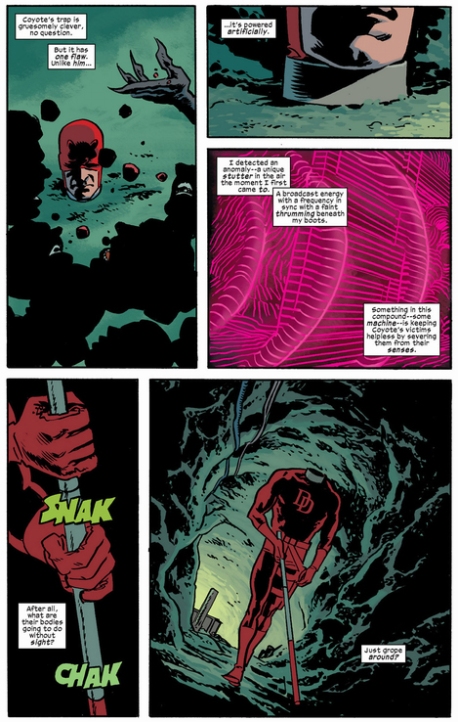 Mark Waid’s Daredevil has become one of Marvel’s most consistently gratifying reads of 2012.  Even after 20 issues and a variation of artists, the title has managed to grab readers with some solid storytelling and artwork.

Everyone’s favourite blind lawyer has always had it rough, and that’s no secret.  For this new volume of Daredevil, Waid desired that the man without fear actually won once in a while.  Whilst Bendis and Brubaker’s runs were phenomenal, there’s only so many times Daredevil can lose a loved one.  So, to keep the comic fresh and entertaining, Waid mixed that old formula up and spruced it up with a new selection of foes for Daredevil to face-off against.

Amongst the new selection of villains, this year saw the arrival of the Coyote, in an arc which was shocking, horrifying and downright amazing.  Yes, Daredevil came face to face with a foe who meddled in some human trafficking, in a horrid way that has never really been explored before.  This arc proved that Waid realises what he’s doing with Daredevil, and he’s utilising the character in ways that haven’t been approached for years.

Chris Samnee has also been a wonderful artist for the title, managing Waid’s desired tone for the book with some fantastic work.  For those who were concerned with the book’s art after Rivera’s departure, don’t fret as Samnee is a superb fit for the title.

If you haven’t got round to reading this title yet, then get on it.  There’s mystery, suspense, action and comedy all packed into one – what more could you ask for in a comic book?  Waid is a great writer and that’s been evident in his past series – such as Fantastic Four – but Daredevil may be one of his best titles to date.  Even after its success last year, it still continues to be one of Marvel’s bests. 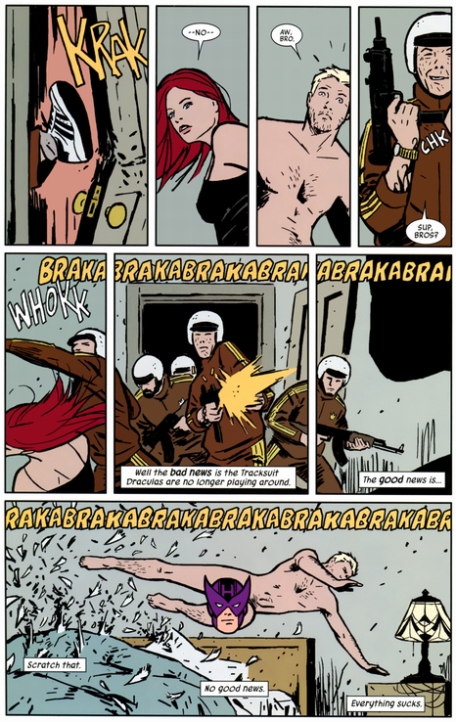 Oh look, another Marvel title has managed to find its way into the top three.  This time round, it’s a comic book series on that Avenger guy.  You know, that one with the bow and arrow.  Hawkguy.

This year saw the release of Hawkeye, by critically acclaimed writer Matt Fraction (Casanova, The Immortal Iron Fist), and renowned artist David Aja (The Immortal Iron Fist).  A creative team comprised of two of the hottest talents in the industry, Hawkeye has become a title which has received much praise, and many reprints.  There’s no surprise there, as this is Fraction and Aja on top form.

Hawkeye can easily be picked up by new readers at any given time, due to Fraction’s decision for every issue to be a self-contained story.  This idea allows for more breathing space, as Fraction is able to entertain readers with unique tales with every instalment.  His storytelling is matched perfectly by David Aja, who has an uncanny knack for utilising panels in a most effective manner.

The third issue of Hawkeye is a clear example of this, as a lengthy car chase actually feels animated.  It’s no surprise if you’ve checked out the artist’s work before, but it’s such a delight to see a unique style in a comic book about Clint Barton.

Aja’s pencils are also brought to life with an amazing colour palette, courtesy of Matt Hollingsworth.  Subtle blends of purple are splattered across the comic, enforcing the archer’s favourite choice of colour.  It’s a stunning mix of talent, which almost makes you forget you’re reading a Marvel comic due to its unique and exciting indie feel. 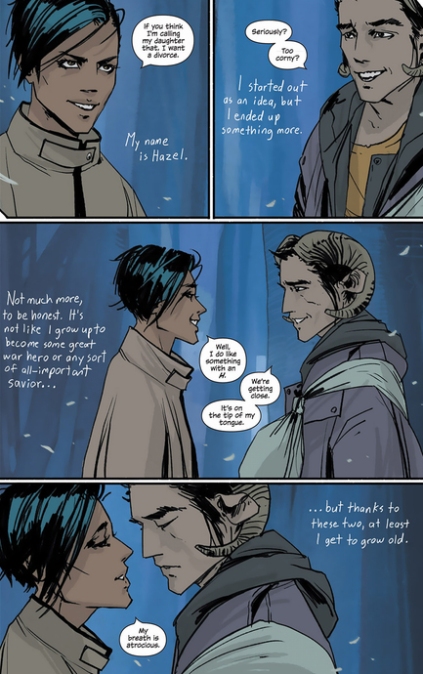 Saga tells the story of two lovers from opposing war factions, who are fleeing authorities and bounty hunters with their newborn baby, Hazel.  It’s essentially a space opera story, wrought with emotion, suspense and action.  It typically reads like a Vaughan comic, which is always a good thing.

Fiona Staples is the artist that joins Vaughan for his new title, and she brings to the comic an amazing set of colours, which matches her fantastic drawings and concepts.  The alien races, ships and covers are all designed by Staples, showcasing her incredible talent.

The artwork can be identified as being slightly similar to those of animation cels, which have a strong focus on the character, placed along with some fantastic detailed backgrounds.  Her art is unique, and that’s why Vaughan desired her for the comic.

From a business stand-point, Saga also blows everything out of the water.  Its first issue was priced at the low cost of $2.99, for double the amount of pages a comic that price would normally have.  Once the first six issues were complete, they were collected in a graphic novel for the silly price of $9.99.  Thankfully, this has enabled many readers to pick up on such an amazing title.

Saga is undoubtedly a return to form for Brian K Vaughan, who has told some of the best stories in comic books ever.  This may sound like a slight exaggeration, but he is a breath of fresh air with his storytelling methods.  He understands development, gut-wrenching emotion and comedy.

If you haven’t got round to reading Saga, then do so immediately.  There’s a reason it’s being lauded by other critics as one of the best reads of the year.  You won’t regret it.