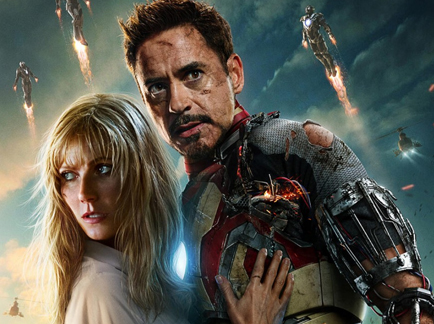 In 2008, Robert Downey Jr. surprised cinemagoers around the world with his perfect portrayal of Tony Stark, in Marvel Studios first major motion picture, Iron Man. Directed by Jon Favreau, the movie was injected with wit, humour and some quintessential comic book action. The film was a huge success – both critically and financially – and it later paved the way for one of the most ambitious movie projects of all time, The Avengers. Fast-forward a year later, and after the box-office smash which was The Avengers, Tony Stark returns to cinemas in Shane Black’s Iron Man 3.

Tony Stark now finds himself in his workshop most nights, in a total state of disrepair after the traumatic events which occurred months earlier in NYC. He is constantly overworking, fixated on building new suits and worried about the very existence of new threatening life-forms. The world as he knows it has been shaken up, but the iron Avenger has yet to face his deadliest enemy to date; the Mandarin.

Regarded as a deadly terrorist and the leader of the Ten Rings, the Mandarin threatens the very safety of the American public. After a very personal attack against Stark, the Iron Man suit is utilised once more to thwart this new mysterious opposition. It is Stark’s most dangerous journey yet, as he comes across the likes of the sinister corporation A.I.M., rival scientist Aldrich Killian (Guy Pearce) and ‘botanist’ Maya Hansen (Rebecca Hall).

The plot of Iron Man 3 lends itself to a mix of storylines that have previously appeared in the comic books, such as Warren Ellis’ renowned Extremis arc, and Matt Fraction’s first arc in The Invincible Iron Man. Of course, as this is Shane Black’s movie, the film is typically set around Christmas. All of the original cast members from the second movie return, such as Gwyneth Paltrow, Jon Favreau and Don Cheadle.

The idea of a third Iron Man film without Jon Favreau seemed like a daunting one, but Shane Black is the perfect director for Tony Stark’s fourth outing. The director is recognised for his ingenious action-movie scriptwriting (Lethal Weapon), and he has previously worked with Robert Downey Jr. on the criminally unappreciated Kiss Kiss Bang Bang. Marvel loosened the reins of their most profitable character this time round, and that clearly shows. This is Shane Black’s film, and it’s an enjoyable ride from start to finish.

The screenplay was written by both Drew Pearce and Shane Black, who have managed to create a script with the perfect mix of action, drama and quick-witted humour. Moviegoers will be quoting the film for months to come, which is partly due to Black’s trademark comedy. Whilst the various trailers and countless TV spots suggested a much darker tone for Iron Man 3, it still maintains the light-hearted comedic tone of the two previous films. Of course, Robert Downey Jr. is the perfect Tony Stark, and he’s utilised to a greater extent than ever before due to the script. The snappy one-liners are excellently suited for Downey Jr., whose deliverance will leave audiences laughing throughout.

Some of the set-pieces in Iron Man 3 are grandiose in scale, and a whole bunch of scenes will whet the appetites of even the die-hard Iron Man fans. One particular moment may upset some fans, but it effectively works to the film’s advantage. Nonetheless, the film is rife with plenty of astounding scenes, which are sure to agape jaws across theatres. The ‘barrel of monkeys’ scene in particular, is a tremendous scene and is handled beautifully.

Thankfully, this isn’t Avengers 1.5, which was a concern for many. Iron Man 3 is its own movie, which Marvel Studios’ Kevin Feige had promised in the past. One of the true successes of Iron Man 3 is that you won’t be left desiring the appearance of a fellow Avenger. The main characters each have their own respective roles in this movie, and they are fleshed out and moulded well into the storyline.

Ben Kingsley’s role as the Mandarin was greatly anticipated since the news reports confirmed his part, and luckily Kingsley delivers the goods here. He’s an unforgettable villain in the franchise, who will be a major talking point after the film. Guy Pearce’s performance as Killian is also a strong one, with more screen time than many had assumed.

Stark’s close friend James Rhodes also has a more substantial role this time round, as Don Cheadle’s character is finally fleshed out. The exchanges between Rhodes and Stark have a true ‘buddy cop’ feel to them, which is all thanks to Shane Black’s previous experience. Gwyneth Paltrow’s Pepper Potts is finally an important factor this time round, as it  actually feels like she’s Stark’s love interest.

Yet again in a Marvel movie, the CGI is flawless. All of the action sequences have seamless CGI, but as is the case with 3D conversion nowadays, the 3D is just not necessary. Ten minutes into the film and you’ll surely forget it’s even in 3D. Marvel need to stop applying useless post-converted 3D into their films, but unfortunately it provides more money for them.

The score is nothing remarkable, but it still accentuates some of the drama and action throughout. The opening number in the film however is truly a strange, yet hilarious way to begin such a movie.

The finale is an explosive hot-mess, which is a relief. The previous Iron Man movies unfortunately suffer from weak third acts, but Iron Man 3 wraps up the storyline nicely with some pleasant surprises, and an ending which could potentially wrap up Tony Stark’s story completely. The fight scenes are lengthy and choreographed well, and it thankfully differentiates itself from the previous uninspired bouts in the Iron Man franchise.

The after-credits sequence is not to be ruined, but it may not be the material that fans are clamouring for. Nonetheless, it’s still nice of Marvel to continue this trend of post-credits sequences and it’s definitely worth sticking around for.

Iron Man 3 is undoubtedly the best film in the series and it could be regarded as the best Marvel movie to date. Whilst that’s a bold statement to make, Shane Black has managed to create a perfect superhero film for fans and cinemagoers alike. It is equipped with a genius script, some terrific action and Downey Jr.’s best performance of Tony Stark so far. It’s a smart blockbuster, with great spectacle.

Upon writing the review, it appears that even before Iron Man 3‘s American release, it is breaking box-office records. Having been shown in 79% of foreign markets, Iron Man 3 has already grossed an impressive $198 million, which has already surpassed The Avengers‘ $185 million start. It’s set to be one of the biggest summer blockbusters yet.

Is this to be the last Iron Man movie with Robert Downey Jr? It just might be, and whilst the talented actor may return for the second Avengers movie, he has at least left us with this remarkable fourth outing as the genius billionaire playboy philanthropist.

One thought on “Iron Man 3 – The Review”