The tenth instalment in the Marvel cinematic universe, Guardians of the Galaxy, opens in theatres worldwide August 1st. Directed by James Gunn, it is without a doubt the most ambitious project Marvel Studios have ever undertaken and is set to expand the their cinematic universe like never before, opening the sandbox into the vast reaches of space.

Rising star Chris Pratt plays Peter Quill, an American pilot who finds himself embroiled in an intergalactic manhunt after stealing a coveted orb of great power. As he hunted by the deadly Ronan the Accuser, he is joined by some of the most unique characters in comics today; Drax the Destroyer, Gamora the assassin, the anthropomorphic gun-toting Rocket Raccoon and a talking tree named Groot.

With a bit of luck, Guardians of the Galaxy could be the biggest blockbuster movie event of 2014. Marvel Studios have cleverly formulated an exciting mixture of talent for the movie, and they’ll surely waste no time in promoting this new and daring extension to their franchise.

It’s a thrilling time to be a fan right now, as Guardians of the Galaxy is set to change the Marvel universe is extraordinary ways. Heck, it may even turn out to be one of the best superhero movies since The Avengers. Brave words perhaps, but here are 7 reasons why that might be true… 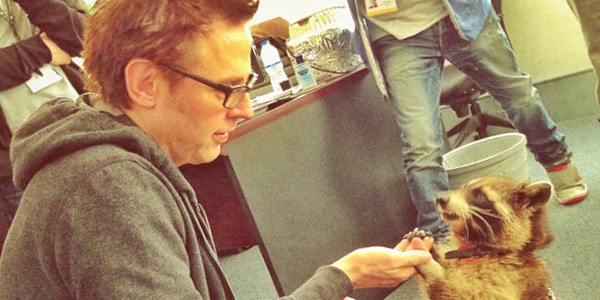 James Gunn may seem like a bit of a left-field choice for such a huge sci-fi epic, but considering most of his previous work, it’s apparent that Marvel may have made the right decision in selecting their desired director.

When James Gunn’s directorial debut, Slither, arrived in cinemas it was evident that Gunn was a director who could equally handle comedy and horror all in one magnificent blend. Whilst horror fans greatly enjoyed his b-movie horror, it took four years until Gunn provided cinema-goers with one of the most esoteric superhero movies to date: Super.

The movie divided critics when it came out, and that could be partly due to Gunn’s subversive and arguably inimitable approach to the movie. However, there’s no doubt that Super was strangely entertaining to some, as Gunn proved he was capable of producing a truly absurd superhero piece, which had never been seen before.

James Gunn possesses a unique ability to provide cinema-goers with something that’s a little bit different and more importantly, daring. His older work on the Troma films can attest to this, because they’re truly surrealistic in nature.

Amicable, funny and even attractive, Chris Pratt is on the cusp of becoming a huge star. He’s got the entire package really, and he’s set to finally explode this year. Having played the lead role in The Lego Movie, Chris Pratt will be playing the main character in Guardians of the Galaxy as the cocky outlaw, Star-lord.

Since Star-lord has been brought back into the comic book universe, the character has become a fan-favourite, which is all thanks to his design and effortlessly cool charismatic attitude. Armed with his two Kree sub-machine guns, Star-lord is a master tactician and is also proficient in close quarter combat, making him the perfect leader for the cosmic team.

Having Chris Pratt play the lead role of Star-lord makes perfect sense, because the actor oozes pure charisma. He’s been gravely miscast in the past, but Pratt has recently landed some incredible roles as of late, and he’s displayed brilliant comic timing in NBC’s Parks and Recreation. Pratt has it in him to become a megastar, as he’s proved his worth in Moneyball, Zero Dark Thirty and The Lego Movie.

There’s an interesting dynamic to the character of Star-lord, and there’s no doubt that Chris Pratt will capture the cunning and charm of the individual. In the footage seen already he’s giving off that sexy rogue impression, which is sure to be a hit with a few people.

Marvel’s comic book series under the same name is currently being written by award-winning writer Brian Michael Bendis, but Guardians of the Galaxy was properly revived in 2008, thanks to the perfect sci-fi writing duo of Dan Abnett and Andy Lanning.

Abnett and Lanning changed the face of the Marvel cosmic universe, and they introduced the Guardians of the Galaxy soon after the epic Annihilation: Conquest series. Fans were treated to 25 glorious issues of the Guardians, as the team established a base of operations in a severed Celestial head, befriended a telepathic Russian dog called Cosmo, and battled against the likes of the deadly Thanos.

The movie looks like it will be borrowing most of its ideas and concepts from Abnett and Lanning’s run on the title, which is good news. Whilst the 2008 series suffered from a lack of sales, Bendis’ current run on the title has become one of the best-selling comics for Marvel – and truth be told, he has managed to revitalise the team in an effectual manner.

The source material for the movie is solid, and Abnett and Lanning provided the great groundwork for the team which we’ll be seeing in this movie. Bendis’ run is also commendable, and he’s helped get the team into the spotlight.

If you haven’t read any of these comics yet, then do so. If the movie turns out to be anything like Abnett and Lanning’s run, we’re in for a huge treat.

Guardians of the Galaxy boasts one of the most incredible casts of the year, as Marvel have once again managed to pull their usual trick of hiring the best possible actors for their respective roles. They’ve really hit the sweet spot for a variety of geeks, with the cast including Dr Who’s Karen Gillan, Star Trek’s Zoe Saldana, and even the WWE’s Dave Bautista (Boo-tista).

However, along with Chris Pratt, the astonishing ensemble doesn’t stop there. There’s a whole bunch of Oscar nominated actors that will appear throughout the movie, such as Benicio del Toro, Glenn Close and Djimon Hounsou. Seriously, Marvel aren’t playing around with this space epic.

For the stranger roles in the movie, the appropriate voice actors have been cast remarkably well. Bradley Cooper is voicing the expert marksman Rocket Raccoon, and Vin Diesel is voicing the tree-like humanoid, Groot. Vin Diesel is an inspired choice too, because he brought to life the Iron Giant, in Brad Bird’s much-loved animation of the same name.

The film sports the best group of actors in cinema this year, and it will help appeal to a diverse selection of cinemagoers. Make no mistake, Marvel clearly know what they’re doing when it comes to casting. They’ve not got it wrong before, so here’s hoping that their track record stays the same. 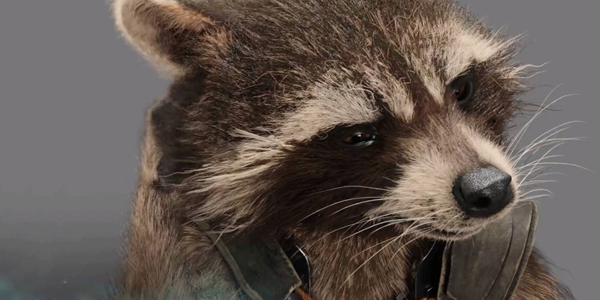 Rocket Raccoon first appeared around 1976, and he was created by Bill Mantlo and Keith Giffen. The character has starred in a few comics since then, including his own miniseries (which featured killer clowns and deadly unicycles) but it wasn’t until 2008 when the anthropomorphic smart-mouthed raccoon entered the spotlight.

He’s a truly unique and great character, and it’s still somewhat bewildering to think that Marvel are going to eventually have him feature prominently in this big blockbuster. It is without a doubt, the biggest gamble they’ve ever taken, as the success of the movie relies on whether or not Rocket Raccoon is accepted by audiences.

Thankfully, the recent footage that’s emerged online has already won over a selection of people, which is reassuring. With Bradley Cooper lending his voice for the role of Rocket, and with James Gunn having the utmost faith in the character, it’s safe to say that this bizarre conception may pay off – and if it does, Rocket Raccoon will be surely become a pop-culture phenomenon.

Of course, to garner interest for the character, Marvel have recently announced a brand new series written and drawn by the talented Skottie Young, which will surely grab the interest of new and old readers alike. Do check out Rocket’s previous appearances too, you won’t be disappointed in this distinctive superhero. 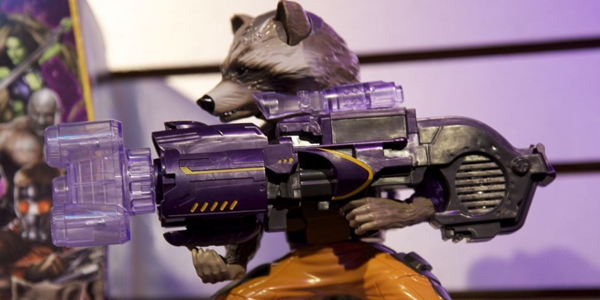 Unsurprisingly, Marvel plans to absolutely dominate toy shelves this year with a wide range of Guardians of the Galaxy merchandise. Hasbro aren’t wasting any opportunities here either, as the most recent Toy Fair has revealed that there’s going to be a toy for almost everyone.

Along with a whole range of figures that are popular with toy enthusiasts, fans will be to purchase their very own selection of Nerf products as well, including Rocket Raccoon and Star-lord role-play sets. Yes, it appears that Halloween could well be dominated by the Guardians of the Galaxy, which is a staggering thought.

With Lego owning the license for Marvel as well, three Guardians of the Galaxy sets will be due out later this summer. Star-lord’s ship, the Milano, will be receiving a large set amongst others, which will evidently appeal to a lot of Lego and Marvel fans. We truly live in a wonderful time, because fans will be treated to their very own minifigure of Rocket Raccoon.

The fact that the Guardians of the Galaxy aren’t well known hasn’t dissuaded Marvel in the slightest, as their merchandising will be produced by partners other than Hasbro. They’re really going all out for the movie, including a long line of costumes and apparel. It makes perfect sense though, as they’ll want to get this movie by a lot of people. 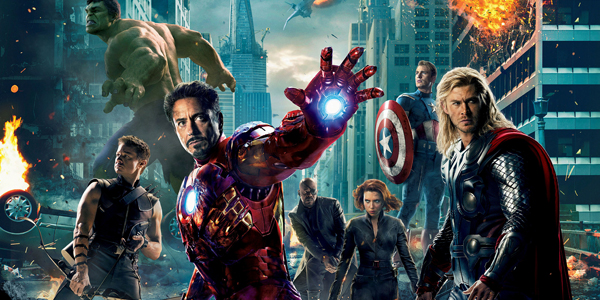 Looking back on Marvel Studios history, you can’t help but be amazed by their innate ability to produce genuinely entertaining superhero movies. They haven’t had a major misstep yet, and they’ve arguably changed the genre for the better.

With every casting decision they’ve made, there really hasn’t been a collection of criticism from disgruntled fans. Somehow, they’ve managed an astonishing track record ever since their first movie, Iron Man.

Since then, they’ve gone from strength to strength. The Avengers turned out to be the biggest and best superhero movie to date, and their Phase Two movies have been relatively impressive even after the Avengers milestone.

It’s no secret that there’s a lot riding on Guardians though, as it is set to expand the cinematic universe in ways we’ve not seen before. Marvel will be delving into new and exciting territory here, and it’s the boldest move they’ve ever made.

Nonetheless, concerns over this movie should be quelled. Marvel Studios fully embrace their source material, and they’ve turned most of their comic book properties into quintessential blockbusters. Surely the same will happen for Guardians of the Galaxy.

Realistically, it should be amazing anyway, as it’s one of the most inspiring blends of talent seen in some time. Get ready for Guardians of the Galaxy, because it is going to be one of the biggest movies of the year.