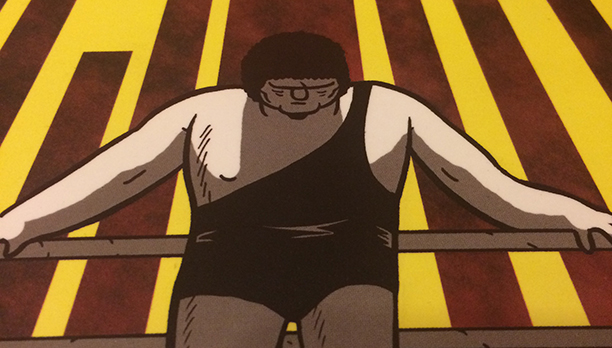 I have two main passions in my life; wrestling and comics. Sometimes, on a rare occasion, those two interests combine. In the past though, they haven’t always complimented each other very well. If you take a brief look back at the history of WWE’s comics, you’ll see a selection of cringe-worthy stories, featuring the likes of a future Kevin Nash battling post-apocalyptic mutants and the Warrior’s self-titled adventure which was completely unreadable.

Thankfully though, writer and artist Box Brown has abandoned some of the terrible WWE comic tropes for his most recent graphic novel; Andre the Giant: Life and Legend. Published by First Second, Life and Legend tells the story of the extraordinary life of Andre the Giant, a man that weighed over 500 pounds and who stood at seven and a half feet tall. His enormous physique provided him a unique life, one that pushed a young farmer into the life of pro-wrestling. Up until his untimely death in 1993, Andre the Giant had touched the hearts of many, both wrestlers and fans alike. He was featured as a heroic figure in wrestling in Japan and the WWE, and most people will also remember him for his role in The Princess Pride (anybody want a peanut?). 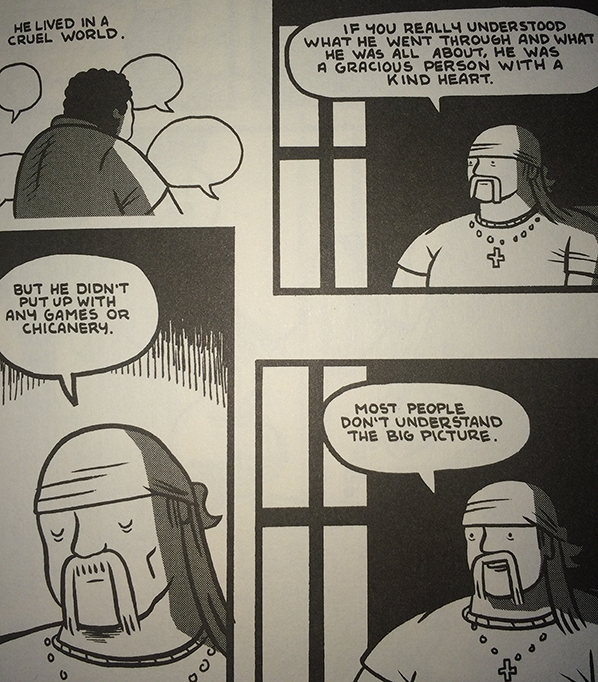 Upon reading Box Brown’s introduction, it’s clearly evident that the cartoonist has an extremely strong passion towards the strange world of pro-wrestling. He describes some key terms as best possible, and highlights that Andre the Giant is one of the most inspirational figures in the history of wrestling. He may have had his human complexities, but deep down, he represented all that was good about professional wrestling. He was a hero to many, and Box Brown showcases his remarkable story throughout this graphic novel.

Box Brown’s work is undeniably fluid, and there’s no fault with the stylistic choice that he employs. His previous work has included strips for Wired, Everything Dies and Bellen!, which all feature his quirky style, bearing a small resemblance to Chris Ware. If anything, Brown is the perfect artist to capture the great life of Andre the Giant. His large stature is recognised throughout the book, and wrestlers are identifiable. His cartoonish Hulk Hogan for example, is spot on.

Andre’s interesting life is captured brilliantly in Life and Legend, and it all flows rather nicely. There are some points when the momentum is shifted somewhat, but everything fits well into the frame of this biographical take on the Giant. Memorable events in his career are put through a great narrative structure, allowing readers who aren’t familiar with the wrestling world to follow the pace easily. When Brown gets to the legendary match between Andre and Hogan at Wrestlemania III, he captures the spirit of wrestling perfectly. It is wonderfully recreated from panel to panel, all with Brown’s pleasing visual style.

There’s a certain charm which is brought into this story, which is of course helped with Brown’s style. Even when Andre isn’t in the ring, it’s still a stimulating read. Humorous anecdotes of Andre’s ability to consume copious amounts of alcohol are featured in the book, along with his daily struggle of his crippling disability, acromegaly.

There are a number of myths that surround Andre’s legacy, but the book manages to capture the humanity of the Giant without taking any liberties. Whilst researching the life of Andre, Brown had to deal with a selection of stories which were told by wrestlers, stories that may have been embellished by their own feelings towards the legend. Life and Legend though, gives a fair portrayal of Andre, with a gratifying storytelling technique. It all seems grounded, despite Andre being such an unbelievable figure.

Looking at the stars of the WWE today, there are many athletes who have remarkable backgrounds and unique talents. John Cena for instance, has carried the WWE for the past decade. Love him or hate him, he has done some incredible things for the company and perhaps one day John Cena may warrant a poignant tale of his life, and the same applies with Hulk Hogan and the Undertaker, but Life and Legend shows readers that Andre the Giant was truly one of a kind. He was larger than life back in the 80s, and his legacy will be remembered for decades to come. He really was the eighth wonder of the world.

Life and Legend paints a perfect portrait of one of the greatest figures in the wrestling world, and wrestling fans will admire Box Brown’s commitment to telling a faithful and engaging story. Even those who have no real interest in wrestling should seek out the book, just for a biographical take on an astonishing legend that was loved by many. Brown brings Andre to life with his art, and it stands out as being an incredible indie comic in its own right.

So, if you find yourself as a wrestling fan, you have no excuse but to pick up this book. Even if you only admire comics – especially the ones that throw out the spandex – then go seek this out. Box Brown is making a great career out of comic books, and he’s set to provide more captivating tales for readers.