Around this time last year, Disney Store came under fire due to the severe lack of Gamora merchandise in the Guardians of the Galaxy range. All of their clothing featured most of the members of Marvel’s superhero team, but Zoe Saldana’s ass-kicking alien was nowhere to be seen.

Despite complaints, Disney hardly bothered to handle the situation. They made no changes to their existing range, and they failed to listen yet again when Marvel’s Age of Ultron hit cinemas. The Black Widow, played by Scarlett Johansson, was lost in the shuffle of muscled men and robots.

A recent campaign sparked interest online in regards to this issue, with the focus shifting towards the confusing lack of Princess Leia products in store. With Leia being regarded as one of the strongest female characters in sci-fi, her absence from Disney Stores seemed baffling.

Due to this backlash spreading like wildfire over social media, Disney had no option but to respond to this criticism. They vowed to produce more products featuring Leia, hoping to diversify their selection of ‘boy’ toys, such as Jedi dress-up costumes, toys and various other items.

Whether or not this change will happen remains to be seen, but this problem has infringed on the recent television series, Star Wars: Rebels. Set before the events of A New Hope, Rebels has been a pure treat for SW fans. Viewers of all ages have engaged with the varied selection of individuals, and Disney has yet again stifled customers with what’s on offer.

Rebels’ range of goods in Disney Store varies from articulated figures to beach towels, and yet, Disney’s blatant ignorance means that two of the best female characters in the show – the adept pilot Twi’lek Hera and weapons expert Sabine – are nowhere to be found.

It’s inexcusable really, as to why a beach towel would consist of three males and a droid, completely disregarding two females who have their own separate identities. On a beach towel, of all things. 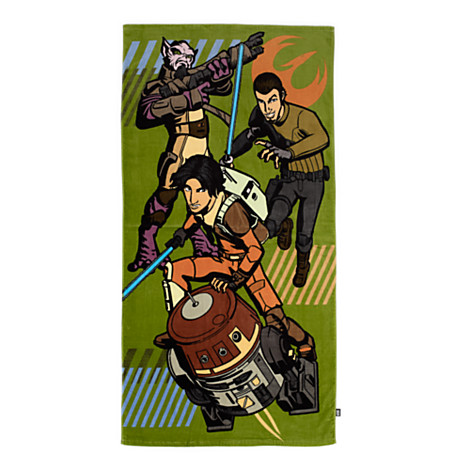 Fans of collectible figurines don’t fare too well either, with Sabine and Hera only found in a two-pack range of figures. In a line consisting of Darth Vader and Luke Skywalker (who isn’t even in the first season), it’s really confusing to see why Sabine and Hera have been lumped in with a Stormtrooper each. Are they not important enough to have their own toy?

Perhaps Disney bought Marvel and Star Wars to cater towards the young male audience, but that doesn’t excuse the lack of females in their Star Wars and Marvel lines. In doing so, Disney Stores are potentially losing business from boys and girls, and collectors themselves. Here’s a surprising fact for Disney and Hasbro; boys can desire characters such as Black Widow and Princess Leia to play with, and girls shouldn’t be stuck with such a pitiful amount.

Investigating further into the Star Wars franchise and the representation of women (or lack thereof) is another discussion entirely, but why is it that girls are stuck with Princess Leia in her slave costume too? A quick search online supports this issue for parents, when their child is confused as to why they can’t have the original Princess Leia in stores. Perhaps if more female figures were available, there wouldn’t be this problem.

In a world which has come to embrace geek culture, more and more children are being brought up as comic book readers and fans of sci-fi. A change needs to happen now to cater towards this lost audience, and Disney/Hasbro are not helping effect this change in a positive way whatsoever.

To put it one way, it isn’t really hard to design products that could appeal to any gender. SW: Rebels has a plethora of new characters and vehicles, mostly inspired by Ralph McQuarrie’s Star Wars concepts from the 70s. Hera is the main pilot of the Ghost in Rebels, and Disney and Hasbro could easily produce that vehicle with Hera included. Toys aren’t rocket science.

The shelves of Disney Stores have an assortment of Disney Princess costumes, but where is Sabine’s Mandalorian armour? Not all girls want to be a damsel in distress, and hell, boys could even armour up as Sabine. Boba Fett was a Mandalorian, after all.

This may seem like the small complaints of a random animated television series, but there’s a much bigger problem here. Star Wars: Rebels garners at least a million viewers per episode worldwide, with the one-hour special reaching 6.5 million people alone. It’s not as if Rebels is unheard of, and it’s not just Rebels which has been effected by Disney’s poor judgement.

Disney needs to shape up with their merchandising, because after the criticisms regarding Guardians of the Galaxy, Age of Ultron and Star Wars, they’ll soon lose out in more potential purchases from fans. There’s more to life than princesses and handsome men, and once in a while someone might want to be the fiercest woman ever seen in the Star Wars universe.