Asian extreme films come in the form of Audition, Oldboy and Ringu and are regarded as cult favourites by many. They’ve become so popular, that Hollywood has remade a small selection  of them for a mainstream audience.

In 2001, the label Tartan Asia Extreme was the first company to successfully distribute their films for a Western audience, including hits from their great catalogue for viewing pleasure. Since then, there has been a boom in the interest of J-horror and Asian extreme movies. But why is that?

An article written by Steve Rose in 2002, stated that ‘US horror has had no new ideas since the slasher movies of the 1980s’, and Rose slated a plethora of American horror films, such as Freddy Vs. Jason and Halloween: Resurrection. He attempted to make the point that the genre was ‘squeezed dry’, and that’s pretty evident when you get the umpteenth Texas Chainsaw rehash every year.

To freshen up the genre, Hollywood’s decision was to purchase the rights to several Japanese films, so that they could be remade for their beloved Western audiences. Instead of receiving the generic slasher movie, viewers could now come across brave new ideas, which actually originated in Japan years before. Whilst it was a remedy for the genre, most of these films still tacked on awful casting decisions and severely mistreated the source material (for example: The Eye, featuring Jessica Alba…).

Nonetheless, this soon made Tartan Asia Extreme’s label wholly accessible, and these extreme films and J-horrors were starting to get a new lease of life. Original films were greatly appreciated by Western audiences, therefore creating a cult devotion to the genre. Tetsuo: The Iron Man is a clear example of this, which appears to be a favourite amongst many.

These films generally consist of themes not necessarily found in Hollywood horrors, with unique motifs throughout. The storytelling makes way for such distinctive scenes, such as Oldboy’s infamous one-take hammer brawl through a crowded corridor, or Audition’s cringe-inducing torture scene.

Most of these movies have unique displays throughout, and cultists admire them for the nihilistic moralities, themes of urban alienation and advanced technology. These elements are encapsulated in slightly different elements from Japanese tradition, such as tokusatu (special effects monster genre), and yurei (traditional ghost stories).

There’s a huge appeal for films such as Ringu, which is considered as one of the first J-horror’s to be recognised from a Western audience. Ringu presented a fresh take on horror, with its victims being haunted by modern technology. There’s underlying metaphors here, as the victims disconnection with Japan’s cultural roots is essentially their ultimate downfall.

It’s these new storytelling elements that hold great appeal for cultists, as they get to experience a different kind of culture completely. Throw away the tired zombies or mutants, and make way for new horrors. 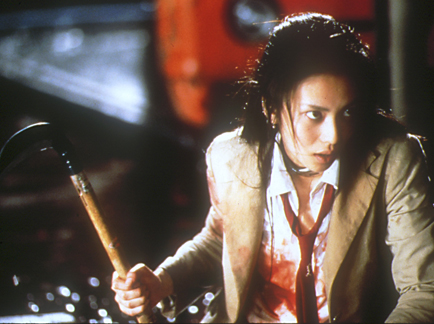 One Asian extreme film in particular, Battle Royale, was received with absolute controversy, from both Japan and America. The Japanese parliament even deemed the film to be ‘crude and tasteless, with no redeeming value whatsoever’. Harsh words.

In America, Battle Royale was also banned and limited to film festivals across the country, and this is due to its story and violent themes (students killing each other didn’t exactly reflect well during the same time as the Columbine incident).

During its DVD release, the unfortunate murder of a 12 year-old girl also shocked Japan – known as the ‘Sasebo slashing’, an 11 year-old murdered a fellow classmate, citing Battle Royale as an influence.

All of a sudden, there becomes a massive aura surrounding Battle Royale, and in America it essentially became the equivalent of being a ‘video nasty’, holding great cult appeal for many.

The film also held a mirror towards the problems facing Japanese society, through the means of an ultra-violent fight to the death, set on an abandoned island. It manages exaggerated themes of reality television, as the film employs spectacular violence throughout.

Whilst it was opposed by some critics, it was wholly welcomed by cultists. Only in Japan though, will you find a film that concerns 42 students murdering each other for their own survival.

The father of J-horror is regarded as Takashi Miike, director of Audition and Ichi the Killer. His style is well-known as being hard-hitting, loud, radical and quintessentially cool. Ichi in particular shows a clear representation of violence that can apparently be painful and playful at the same time, and its reputation amongst film-fans is huge. 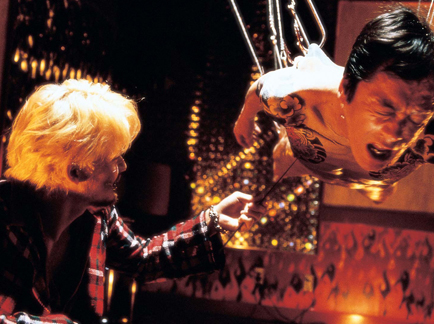 Miike’s work provides answers towards why J-horrors and Asian extreme films are ‘cult’. Ichi set a new boundary for the portrayal of violence; it was a step up to what had seen before. It evolved the genre into something else entirely. It’s exciting for cultists, to discover something so unlike anything they’ve seen before.

Similar to Battle Royale, the film was dismissed by critics. It’s a cult favourite, because it’s explores the possibilities of cinema, by testing how extreme the content can be. Ichi manages to question the viewer as to why they’re watching such brutal violence, by interacting with audiences (in the same way Michael Haneke’s Funny Games portrayed).

The story concerns Kakihara, a sadomasochist that searches for the ultimate killer, known as Ichi. He believes that Ichi will finally be his true calling and amongst his journey, he creates hell in the criminal underworld. Throughout the film, viewers are treated to lovely scenes of nipple slicing, body slicing, people getting hung on meat hooks, and other general nastiness.

Kakihara’s persona is a well-known one, due to his unique features. His face is scarred, and he even has neat little cuts across his cheeks. In Japanese cinema, it seems that their cult figures are often exaggerated versions of normal characters, such as Sadako (Ringu) and Dae-su Oh (Oldboy).

That may not be very important to a Western audience, but thanks to these tales and their oddly unique culture, they reach towards an audience who are tired of the mainstream. It’s fresh material.

Japanese films cross the boundaries of what is acceptable with its blatant exploitation, pushing the envelope to such extremes that cultists long for. It can be said that most cultists find some pleasure in becoming fans of these movies, because they’re the ‘anti-mainstream’, and that’s something a fan can take great pride in.

The cult appeal has waned slightly since 2009, as festivals have reported some audience fatigue with the genre. However, it still has a large devoted cult base, and these films certainly deserve their own recognition.

If you haven’t got round to watching any of the films mentioned, then please do so. They are readily available on demand and in stores. There’s always a special place for Battle Royale, and if viewers do find themselves enjoying the movies, do not hesitate to fork out on some of the collector’s editions.

– More cult features on the way, including those discussing Bruce Lee and the greatest cult movie ever made, The Big Lebowski.